Adamjee Cantonment College is a renowned and well established educational institution of the country. It is crowned with the glory of passing over a half century in the field of education arena of Bangladesh. The institution has earned the rare prestige of being one of the top ranking colleges of Dhaka Education Board for its outstanding academic achievements in HSC exam in the recent academic years. It was adjudged the best educational institution of the country for the academic year 2000.  In 2018, it has been declared the best college of Dhaka City by Education Ministry in National Education Week. In terms of HSC result the college has been placed among top ranking 5 colleges of Dhaka Board for last three years. In 2015 it secured 1st position in Dhaka Board. The result of Hons, Masters and Professional BBA Programme of this college is one of the best ones in the exams under the National University. In 2014, 2015, 2016 & 2018 consecutively the college was recognized as the best college among 33 colleges run by Bangladesh Army and won the prestigious Army Chief Trophy for academic excellence. The mission of this institution is to create worthy citizens for the nation, inculcating the spirit of education, discipline and morality in the young learners and ensure a congenial environment for the students to develop themselves in the best possible way both in curricular and extracurricular realms.

Since its inception, the college has made significant contribution in the field of education. Besides striving for academic excellence, we lay great emphasis on all-round development of the students, specially in terms of their mental , physical moral and technological upliftment. The quality education through discipline and morality coupled with knowledge of technology, inextricable from the life of 21st century ,gives our students insight to go ahead in life which will eventually lead them to their desired destination. A large number of ex-students of this institution are now highly placed in the civil and military administrations ranging from NASA Scientist to the Chief of Armed Forces. We are totally committed to make every endeavour to improve the quality of education we impart and make this place into a center of excellence. 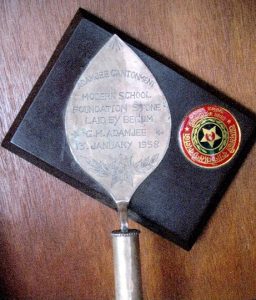 Begum Gul Muhammad Adamjee laid down the foundation stone in January 1958. The main building was completed in January 1960. The then President of Pakistan Field Marshal Mohammad Ayub Khan wanted to establish a quality institution which led to the birth of Adamjee Cantonment School. The institution was later renamed as Adamjee Cantonment College. This institution was established following the ideology and curricular activities of original renowned public school of England–Eton and Harrow. The motto of this college is to impart education, discipline and morality. It has a flag of navy blue colour with the monogram of the college. The original building of the school is now where the ‘Adamjee Cantonment College’ stands. The school was separated in 1995 and was made totally an independent institution.

Adamjee Cantonment College enrolls both boys and girls of H.S.C, Graduation and Post Graduation level. Though the institution is primarily for the children of Army personnel, pupils from the civilian section fill the major portion of the college. The college is directly under the supervision of the Director of Bangladesh Army Education Corps. The principal is the head of college’s administrative body. Historically, the college principals were Lt. Colonel or Colonel level military officers from Bangladesh Army. However, many civilians have served as principals in this institution as well. The name of the present principal of the college is Brigadier General Md Mahbub-ul Alam, ndc, afwc, psc, MPhil, PhD

Eminent architect T Abul Hussain Thariani, who is rememberd for the design of the National Baitul Mukarram Mosque , planned and designed the premise that was developed by Omar and Sons Company under the supervision of Major General Omrao Khan of  the Pakistan Army. The institution started its journey on 16 February 1960 with only four teachers. The principal of the institution was a British named Daulman.

Before the liberation period, the college achieved the prestige of being a reputed English Medium institution. After liberation, Bengali became the medium of  study. The students appeared at the Matriculation and Intermediate Examinations respectively in 1962 and 1964 for the first time. The graduation course (pass) was introduced in 1972–1973 session. In the session 1996–1997 Masters Course was introduced and in the session 1998–1999 Honours in English, Accounting, Political Science and Economics Course was introduced. Following this, in the session 2004–2005 BBA programme was introduced. In the present session, Honours Course in Management has been started and procedures for opening MBA programmes are going on.

In 2011 Adamjee Cantonment College implemented Google Apps for Education for each and every staff and students of this institution to reform our very traditional “chalk and talk” world to the world of virtual reality and cloud storage and connect us with the huge tech-educational shift happens outside.